Stabilized Properties Holding Their Own

Stabilized Properties Holding Their Own

Apartment demand was up through April of this year compared to the pre-pandemic level of April 2019, rent growth has reemerged, and average occupancy has held steady despite an increase in new supply for the Greater Fort Worth market. This rebound is an encouraging development for the industry, but another indicator of market health is the performance of stabilized properties versus the area as a whole.

Using conventional properties of at least 50 units that entered 2021 already stabilized, let’s have a closer look at how these properties have fared.

After remaining virtually unchanged through April of this year, Greater Fort Worth average occupancy closed the month at 90%. For properties that entered the year stabilized, a similar lack of movement left the average at just below 94%. This marks the third straight April with stabilized average occupancy ending April between 93% and 94% after hovering around 95% in the middle years of the last decade.

Net absorption totaled only about 200 units in the period This result compared very favorably to the less than 20 net absorbed units in the same portion of 2020 but fell well short of the more than 1,100 net absorbed units from January through April of 2019. Five of the 12 ALN submarkets for Greater Fort Worth experienced negative absorption to start the year. Demand was led by the Mid-Cities and Central Fort Worth portions of the market. Each added more than 100 net rented units. Stabilized demand was entirely in the Class A and Class B subsets with negative absorption in the lower two price tiers indicating the potential of continued household consolidation within that resident pool.

Average effective rent growth for Greater Fort Worth overall through April was 3.1% while the gain for stabilized properties was a respectable 2.6%. That degree of stabilized rent growth looks even better within the context of the 1.6% appreciation for the entire year of 2020. The largest increases through April of this year were in the East Fort Worth and North Fort Worth submarkets – each added more than 4% at the average. No submarket fell into negative territory, and only the Central Arlington and North Arlington regions failed to reach 1% growth.

One reason for the rebound in rent growth was a decrease in reliance on lease concessions. A 15% reduction in discount availability resulted in 24% of stabilized properties offering a discount to close April. This was slightly below the 27% mark for the market as a whole, but still well above the 17% availability from April of 2019. At the end of last April, still in the early days of the pandemic, lease concession availability had increased to 25%. The average discount value has decreased as well so far this year, though not to the extent of discount availability. A 6% decline brought the average to 2.7 weeks off an annual lease, slightly below that of the market as a whole and only a few days above the average from April 2019.

The start to 2021 has been a good one for multifamily, and this is certainly the case for Greater Fort Worth. Stabilized properties have not been excluded from the rebound, with average occupancy holding steady while rent growth nearly touched 3% through the first four months of the year. An important development has been a drawdown in the availability of lease concessions after a 25% increase in availability in 2020. With the vaccine rollout continuing, economic activity returning to normal, and consistently robust multifamily demand since the trough of last summer – the Greater Fort Worth market appears poised to continue the positive momentum. 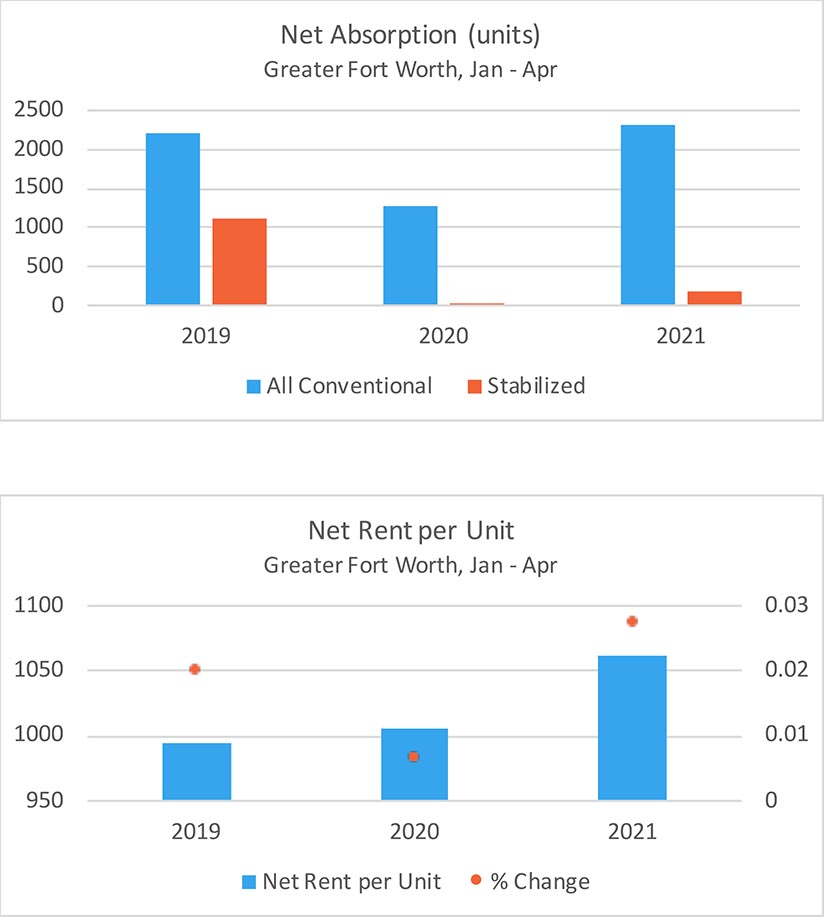