Another quarter is in the books and summer is around the corner. The opening quarter of the year was a good one at the national level, with the apartment demand resurgence that began in the latter half of 2020 continued through the first three months of the new year. Let’s take a closer look at how the quarter shaped up for Greater Fort Worth.

As always, statistics will refer to conventional properties of at least 50 units.

Although the new construction pipeline was very active in the first quarter nationally, delivering 10% more units than in the opening quarter of 2020, that was not the case for Greater Fort Worth. New supply volume was consistent with that of recent years for the first quarter with a little more than 1,500 new units delivered across Greater Fort Worth.  Two new properties were brought to market in the South Fort Worth submarket, and the nearly 550 new units there were the most of any submarket in the quarter. Overall, five of 12 ALN submarkets added new units.

Apartment demand was more than 40% higher than in Q1 2020 as more than 800 net units were absorbed. That level of demand was not enough to stave off an average occupancy decline, but the decrease was by less than 0.5% to close March at 90%. Absorption was concentrated in the top two price classes and Class A net absorption was actually higher than the quarterly total at more than 900 units. This is because although there was an increase compared to last year in demand for both Class A and Class B, the bottom two tiers were in negative territory. Class C properties shed about 250 net rented units and Class D properties lost nearly 200 units.

The encouraging demand performance sent average effective rent up by 1.7% to open the year and the average unit ended March leasing for $1,139t per month. This level of rent growth was more than double the value from Q1 2019 and easily outpaced last year’s figure as well. Class B properties managed a 2.3% gain, the most of any price class. The increases were dispersed across the tiers though - all four classes added at least 1% to their average effective rent. A few specific regions of the market stood out. The South Fort Worth area, the location of the newest units in the period, added 4% to the average effective rent. The Midland Cities, North Fort Worth, and North Richland Hills – Hurst – Haltom City submarkets each gained around 2.5%.

One factor that aided rent growth was a decreased reliance on lease concessions – both in availability and average value. The larger decrease was in concession availability. Just less than 30% of conventional properties were offering a discount at the end of March after a 9% decrease in the quarter. The average discount value decreased as well, by about 3%, and the average closed the quarter at just more than three weeks off an annual lease. From the price class perspective, there was an interesting dichotomy in the movement on concessions. Classes A and B have returned to more typical levels of concession availability, but the average discount value remains higher than normal. Classes C and D continued to have elevated rates of discount availability, but the average value is in line with previous years for the first quarter.

Overall, the first quarter was a good one for the Greater Fort Worth multifamily. New construction deliveries were on par with previous years, but apartment demand was significantly higher. That robust demand led to effective rent growth of nearly 2% and operators beginning to draw down concessions.

The bottom two price tiers have continued to display some softness with negative net absorption for the quarter and continued elevated lease concession availability, but rent growth remained positive. With the continued rollout of the COVID-19 vaccine and economic re-opening, Greater Fort Worth appears well-positioned for a strong 2021. 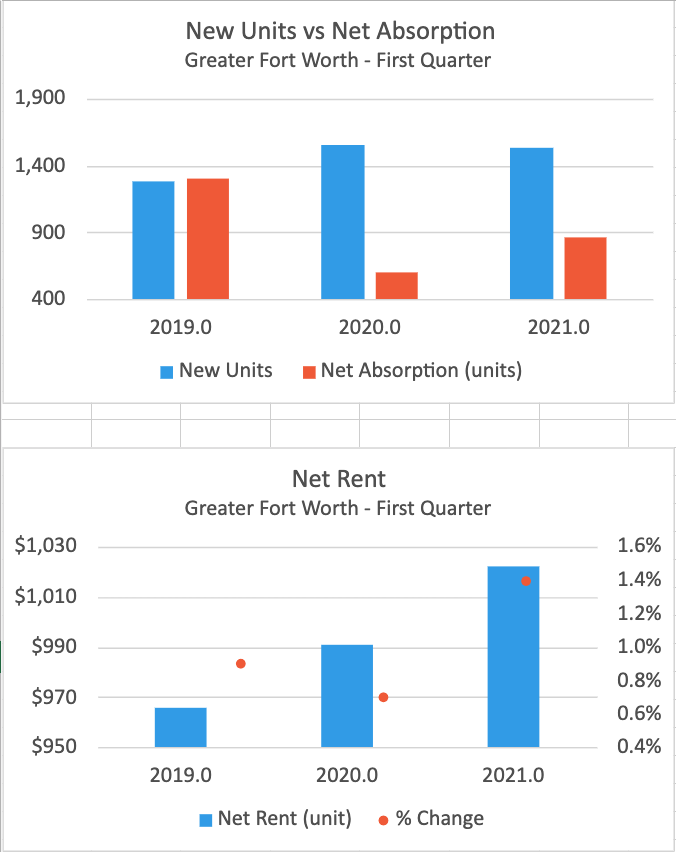 Jordan Brooks is a Market Analyst at ALN Apartment Data.  In addition to speaking at affiliates around the country, Jordan writes ALN’s monthly newsletter analyzing various aspects of industry performance and contributes monthly to multiple multifamily publications. He earned a master’s degree from the University of Texas at Dallas in Business Analytics.